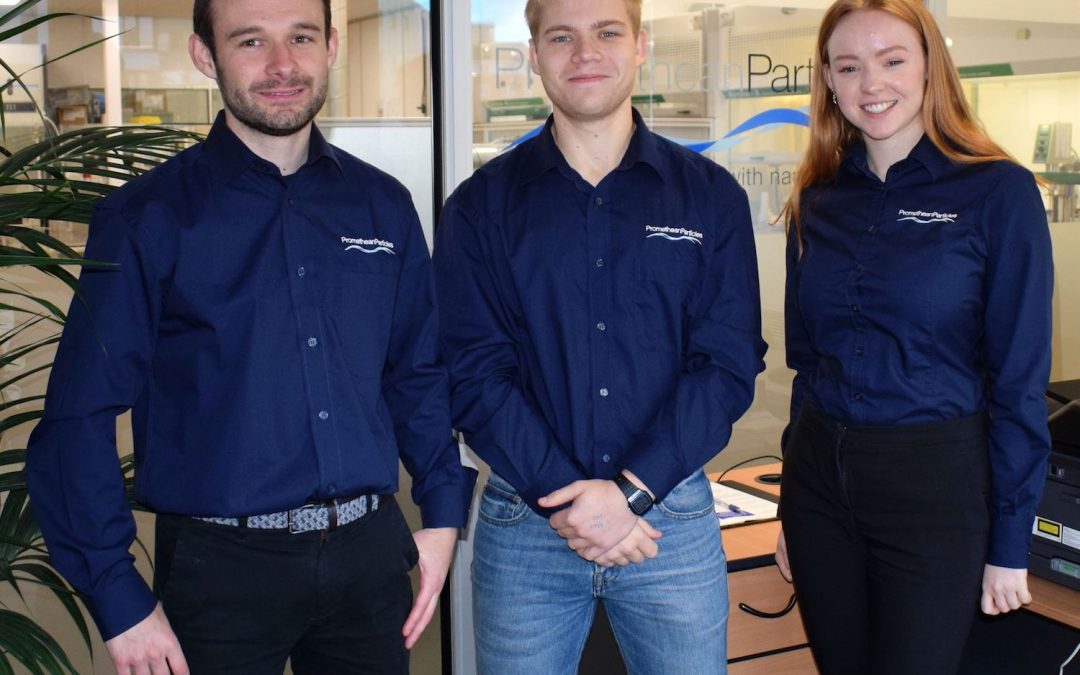 Promethean Particles, a global leader in the development and manufacture of high-specification nanoparticles for industry, has underlined its commitment to sustained growth with a trio of new appointments.

As the rapidly expanding company seeks to extend its reach into key markets, Research Scientists Charles Toft and George Nichols have strengthened the development team, while Helen Purdue has joined to lead the Technical Sales team.

Based at Genesis Park in Nottingham, Promethean worked on the European collaborative project SHYMAN (Sustainable Hydrothermal Manufacturing of Nanomaterials) which created the world’s largest multi-ton scale nanoparticle manufacturing plant. This has seen Promethean’s production capability increase from 1 ton per year to more than 1,000 tonnes, supporting the development of its innovative continuous-flow technology) and nano-enabled applications.

Research Scientist Charles Toft graduated from the University of Nottingham with a Chemistry PhD, focusing on the synthesis and characterisation of supramolecular self-assembled nanostructures. He previously attained a Master’s degree in Chemistry after studying the use of supercritical carbon dioxide for the functionalisation of polymers. Charles’ role involves the research and development of new products, as well as working directly with customers on tailored feasibility studies.

Joining Promethean at the same time, fellow Research Scientist George Nichols achieved a Master’s degree in Chemistry from the University of Bristol, where his final year project focussed on the use of high-performance liquid chromatography-tandem mass spectrometry, analysing the metabolites of ion-transporting drug molecules. His current work at Promethean focusses on developing conductive copper-nanoparticle inks for the printed electronics market.

Before graduating from Sheffield Hallam University with a BSc (Hons) in Chemistry in 2019, Helen Purdue undertook a year-long placement with Agilent. Working in a similar role to her current post at Promethean, she gained a wealth of valuable experience which will prove vital in her new Technical Sales position, with responsibility for all the commercial activity of the business.

“This is an incredible period of growth for us,” said Laurie Geldenhuys, CEO at Promethean Particles. “These new appointments underline our commitment not only to pioneering this incredible technology and developing new applications and solutions, but also in ensuring our continued and sustained commercial success as a business.

“We are delighted to welcome Charles, George and Helen to our team at such an exciting time,” he said, “and we look forward to them being part of this newest chapter in our continued success story.”